The rising tide of the blue economy 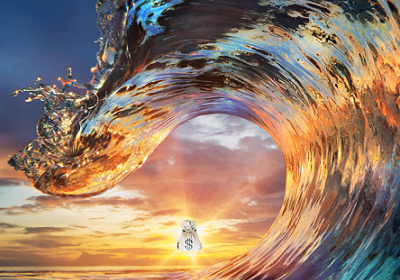 Forget green. The next clean economy is blue.

Blue, as in the deep blue sea.

For the past few years, we’ve seen a rising tide of companies, nonprofits, consortia and others diving in at the intersection of ocean stewardship and business opportunities. In other words: How do you maximize the economic value of oceans while protecting them?

The term "blue economy" has been around for a while. The World Bank put out an infographic about the blue economy two years ago and has a web portal on the topic. We first covered the subject in 2015 and included it as one of the 10 emerging trends in our 2016 State of Green Business report.

Since then, the focus on oceans has swelled in tandem with growing concerns about climate change, including the potential for oceans to become carbon sinks and the need to protect coastal ecosystems to thwart flooding from rising sea levels; the environmental impacts of oceangoing shipping; the collapse of fisheries; the promise and pitfalls of aquaculture; the growth of ocean mining and other resource extraction — and, of course, the tsunami of ocean plastics and microfibers fouling the world’s waters.

And companies, from multinationals to startups, sometimes in partnership with advocacy groups, are slowly but surely dipping their toes in the waters.

With good reason: "Overfished, polluted, taken for granted, carelessly abused and destroyed, and much more fragile and complex than we once thought, the largest living space on Earth is fast deteriorating," says the nonprofit WWF. "This doesn’t just threaten marine habitats and species … but also our own health, way of life and security."

It points to some grim realities:

- Oceans cover more than 70 percent of Earth’s surface, but only a tiny fraction — just 3.4 percent — has been protected.
- Coral bleaching, rising sea levels and changing species distributions from climate change are already having a marked effect on ocean health.
- 90 percent of the world's fisheries are already fully exploited or overfished, while billions of unwanted fish and other animals die needlessly each year.
- Fish farming is often touted as the answer to declining fish stocks, but the farming of fish and shellfish can harm wild fish through the pollution fish farms discharge as well as from escaped farmed fish, increased parasite loads and the need to catch wild fish as feed.

What’s encouraging is to see companies wading in. Last week, we named five companies "using business to save our oceans," such as Organic Ocean Seafood, a community of seafood producers  —  traditional, modern, indigenous — who share an ethos built upon solving the ocean’s environmental challenges while protecting its productive capacity.

Of course, some companies, such as McDonald’s, have been serving up Marine Stewardship Council-certified seafood for years. In 2011, it began a quest to certify more than 20,000 of its restaurants to the MSC Chain of Custody traceability standard. The company plans to source all of its wild-caught fish from verified sustainable sources by next year, and still keep its Filet-O-Fish at a consumer-friendly price point.

That’s ambitious, but also just a drop in the bucket. There are more opportunities in oceans than we can fathom.

Last month, for example, the nonprofit The Nature Conservancy announced a $1.6 billion plan to help save and restore the world's oceans by selling "blue bonds" to coastal and island countries. Its Blue Bonds for Conservation initiative, the group explains, "leverages upfront philanthropy to catalyze as much as 40 times more in additional investments." TNC aims to help 20 island nations refinance their national debt; the governments use the savings to invest in marine protection efforts that will revitalize fisheries and protect coral reefs.

It’s not the first group to dive in. Last fall, the government of Seychelles issued a blue bond — the first such bond approved by The World Bank — to raise capital to finance ocean-based projects that have positive environmental, economic and climate benefits.

There’s lots more to come, thanks in large part to advances in technology. For example:

- Cod and haddock fishers in the U.S. Northeast are hauling in their catch under the watchful eye of video cameras to better sustain the area’s fisheries and the communities that depend on them.
- Canada’s Ocean Supercluster (PDF), a private-sector-led partnership, hopes to leverage the latest science and technology to address global challenges and ensure better outcomes for oceans.
- The XPRIZE is leaning in on Sustainable Development Goal 14 — to "conserve and sustainably use the oceans, seas and marine resources" — by showcasing a range of blue-economy innovations.
- WWF has partnered with Conservation X Labs, a conservation innovation startup, to form Ocean X Labs, an innovation platform "to solve global challenges of oceans conservation through the power of emergent technologies, open innovation, collaborative problem solving and entrepreneurship."
- A range of other technologies, such as seafloor sensors, including robots and drones, are being used to help make smarter decisions as we work to improve ocean health and the communities.

All of these and more are whetting the appetite of entrepreneurs, investors, governments and the global companies that depend on the seas for their supply chains.

Of course, technology can’t solve it all. There are thorny governance issues, new standards and matters of equity to work out. And the impacts of climate change — rising sea levels, bleached coral reefs, ocean acidification, the loss of breeding grounds, even changes to ocean currents — keep roiling the dynamics, and the urgency, of ocean protection.

But we’re on the cusp of a new wave of business opportunities based on a realization that the oceans are not infinite, that they are threatened, that there’s commerce in protecting them, and that their well-being and ours are inextricably linked.